To share your memory on the wall of Joyce Harmon, sign in using one of the following options:

There may be a delay while processing. Please do not click the back button or refresh while a payment is processing.

Your donation has been processed successfully

A receipt has been emailed to the address provided. A receipt may also be printed.

Often described as a "firecracker" with fierce intelligence and ... Read More
Joyce Gail (nee Coleman) Harmon, age 80, passed away on January 28, 2021 at the Laurels Nursing Center; she had bravely fought Alzheimer's, metastatic cancer and Covid-19.

Often described as a "firecracker" with fierce intelligence and quit wit, Joyce was born on Wolfpit, Pike County, Kentucky on January 2, 1941.

After graduating from King's Daughters Nursing School (Ashland, Kentucky), Joyce moved to Bryan, Ohio, with husband, Billy "Bennie" Harmon, her lifelong love. She was employed as a Registered Nurse at Community Hospitals of Williams County for 44 years. In addition to working full-time and raising 3 daughters, Joyce was an avid seamstress, quilter and spent many hours each year "putting up" vegetables from the family garden

There will be a visitation on Sunday, January 31 at 2:00 PM at Thacker Memorial Funeral Home in Pikeville, KY., followed by graveside service at Annie E. Young Cemetery, Pikeville, KY.

Arrangements are under the direction of Thacker Memorial Inc.
Read Less

Provide comfort for the family with a meaningful gesture of sympathy.

We encourage you to share your most beloved memories of Joyce here, so that the family and other loved ones can always see it. You can upload cherished photographs, or share your favorite stories, and can even comment on those shared by others.

Plant a Tree in Memory of Joyce
Plant a tree 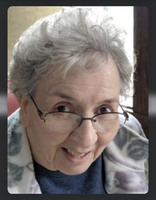 Obituaries
Why Come to Us
Funeral Planning
Grief & Healing
Help & Guidance
Proudly Serving the Communities of Pikeville, Pike, Elkhorn, and all of Eastern KY